Trajectory is the curved path followed by an object with a certain mass while moving through space with respect to time. It is also known as Flight Path.

Projectile motion gives rise to trajectory as it is such a motion in which the moving object follows a curved path in the air due to gravity.

We all know that whenever an object is thrown upwards, then, due to the gravitation pull of the earth, after reaching a certain height and travelling a specific distance, it comes back to the earth after some time.

So, the trajectory in physics simply tells about the path of the projectile in space due to gravity. More specifically, it is a parabolic path in the air.

Galileo first provided the idea of the curved path of an object in space.

Similarly, in terms of mathematics, trajectory describes the position of an object over a particular instant of time.

The various examples of trajectory are as follows:

So far, we know that the parabolic path of the projectile as a function of time due to gravity is defined as Trajectory.

Suppose a ball is thrown upwards that undergoes projectile motion. Consider that the figure given below shows the motion of the ball in space: 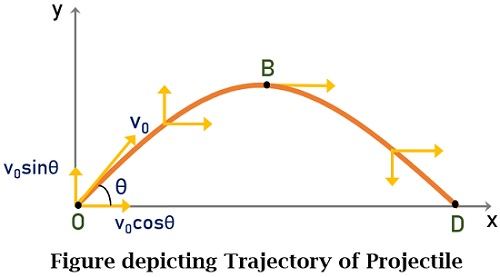 Here x and y represent the horizontal and vertical position of the object in meters, respectively, while v0 is the initial velocity with which the ball is thrown. Also, g represents gravity (= 9.8m/s2), and θ represents the angle of projection from the horizontal plane.

In trajectory, the path possessed by the ball depends on the gravitational force and resistance of air. Here, path OBD represents the trajectory of the projectile, and it is parabolic in nature.

So, the vertical position of the ball in space is given by the formula:

Thus, for the above figure, we can write it as:

Hence, by the use of the above-given formula, one can determine the vertical position of the ball in the space.

Let’s now understand how the vertical position of the projectile can be determined by using the above-given formula.

So, according to the formula of trajectory,

On substituting the respective values, 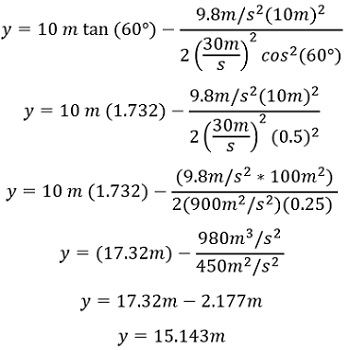 Hence, for the above given example, the vertical position of the stone reaching the other end is 15.14 m.