Teeth and their significant functions cannot be ignored while counting the other important parts of our body. Teeth’s are helpful in chewing the food stuff, speak and smile. Knowing about the teeth and their roles in not only of dental assistant interest, in fact a common man should also have the general idea about it and the critical roles played by the different types of teeth in our lives.

During the course of life, a person undergoes the development of two sets of teeth. Your primary teeth that are often referred as baby teeth will come at the time when you are a baby. Gradually with the time as the person age increase so the teeth number will also, and finally one will have 20 primary teeth and 32 permanent teeth at different stages.

Instead of delve into the benefits regarding oral hygiene, and food habits this article will dive into the different types of teeth we have and their use. It is acceptable commonly that we have three different varieties of teeth namely Canines, Molars and Incisors. Yes, one should not forget to distinguish the types of molars that includes premolars and third molars. So, all in all we have five different types of teeth, and whose description along with their job are describe in the upcoming points.

Canines salon known as Cuspids are closely link between humans and the carnivorous (wolf, tiger). These teeth are sharp, pointed present on either side and are known to work as per their names. Looking to the predatory teeth of animals the same work is been performed by the canines of humans, which is of tearing and rip the eatables apart. These teeth becomes permanent around in ten years where the bottom cuspids arrives before the upper cuspids.

One of the prominent feature of the cuspids is that they are the longest teeth and have the pointed end with one implanted root. Although canines rip the food, but their position also supports and guid the teeth and mouth into the proper biting position. There are four canines in our mouth, two in each upper and lower jaw.

These are the first adult teeth that grows after our baby teeth, or the primary teeth and make the smile at its best. In total there are 8 incisors present in our mouth, 4 at the top-center of the our mouth or at upper jaw, while 4 at the bottom-center of our mouth or at lower jaw.

Incisors are helpful during the initial bite, and characteristically they are thin with a flat-bottom. We initiate the process of biting the food with the incisors followed by tugging and pulling into the mouth. The incisors are present between the cuspids, or canines, and are also known as front teeth or anterior teeth as these are the one who are at high frequency to display when we smile or talk.

The primary incisors arise at around 6 months of age and later get replaced by the permanent set of incisors at the of six to eight years.

Molars are the primary masticators, that means the molars are the most commonly used teeth associated with chewing. While out of five different types of teeth only three are commonly recognizable as there is huge discrepancy in differentiating the varieties of molars we possess in out mouth.

Molars are known for the grinding and chewing the food, during the later stage of life they are replaced by the eight permanent premolars, four of upper and four on lower jaw. These set of teeth will begin to grow at 12-15 months of age. 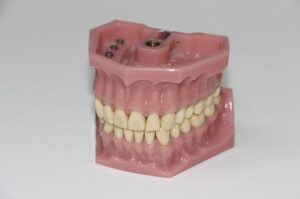 Molars are featured with the large teeth with the flat surface and play the major role in chewing the food into tiny pieces that can be swallowed up easily. Now, lets further discuss the different types of molars in the upcoming points:

Premolars also known as Bicuspids or first molars as these are the first molars that begins to grow at the age of 12- 13 years. Premolars grows just next to cuspids or canines in the mouth and counted as the foremost molars. They serve the purpose of grinding and chewing the food. All in all there four premolars, the two in the upper jaw, while two in the lower jaw of the mouth. The primary one comes around the age of 10, followed by the permanent one that will start appearing at 11 years.

Third molars or the Wisdom teeth are last molars to grow into the mouth. These teeth even come at a the late stage of life and can be painful too. It is sometimes suggested for the removal of the wisdom teeth, as they are present far back in the jaw that they can cause various troubles. These teeth will erupt at the at 18 – 20 years of age, and some may even face over crowding of thee teeth throughout.

Over the lifetime, we will can observe the falling and eruption of the teeth, this is the process of nature. However, the set of teeth will be according to the five types that have been discussed so far in this article; canines, incisors, molars, premolars and wisdom teeth.

As said that teeth will begin erupting from the age of six months, and late comers are the permanent one that will appear at the age of 18 -20 years. These are wisdom or third molars teeth. But all of them play the crucial role in chewing, grinding, rip, smiling, talking. So, they all have the some or the other purpose to serve.