What is Wage and Salary Administration?

Wage and Salary Administration implies setting up and enacting sound policies and practices, concerning employee compensation. It aims at defining and maintaining a just and fair, wage and salary structure.

It amounts to one of the primary components of the cost of production, which considerably influences the growth and profit potential of the enterprise. Besides this, it is the main source of the worker’s income.

The process of wage determination is quite complex. It may include the following steps: 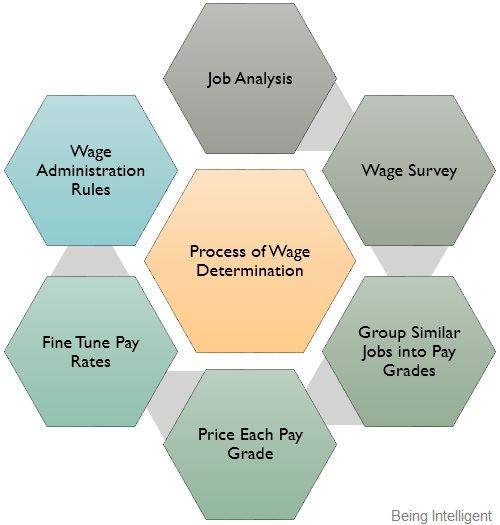 Once the job specification is complete, the process of grading, rating and job evaluation takes place, in which the job is rated, so as to ascertain the value of the job in relation to other jobs in the organization. Thereafter job is associated with the price, which encompasses the translation of the relative job values into terms of money.

Group Similar Jobs into Pay Grades: On the receipt of necessary data relating to job analysis and wage survey, it is now the time to assign pay rates to each and every job, however, there is a precondition to group the jobs into pay grades. In a pay grade system, the job of almost equal strain or importance is ascertained by job evaluation.

It states the amount of pay received by an employee, often on the basis of the responsibilities undertaken.

Price Each Pay Grade: The assignment of pay rate to each pay grade is attained with the help of the wage curve. A wage curve reflects on a graph, the existing pay rate, which is paid for jobs in various pay grade, in relation to the ranks assigned to each job. The wage curve shows:

Fine Tune Pay Rates: As the name suggests, it involves:

Wage Administration Rules: The information with respect to average salaries and ranges in the salaries of the group should be made clear to the staff concerned because secrecy in this matter may lead to dissatisfaction and it may also impair the probable motivating impact of disclosure. At last, the employee is appraised and the wage is determined for the grade in which he/she is perfectly fit.

In a nutshell, wage and salary administration is a challenging task for the management which involves decisions relating to the appropriate wage structure for the human resources. It is the set of practices employed in the planning and disbursing payment to the employees.