What is a Wagering Agreement?

A wagering agreement is an agreement between two parties wherein one party commits to pay a certain sum of money to another person on the occurrence or non-occurrence of a future uncertain event. Such agreements are void. This means that none of the parties can file a suit to recover the amount or anything won in such contracts. These agreements are based on chance.

What is a Wager?

The literal meaning of the word ‘wager’ is a bet which means something specified to be lost or won as an outcome of a doubtful issue. Therefore, wagering agreements are nothing but betting agreements.

So, alternatively, we call wagering agreements – ‘wager’ which is a game of chance wherein the fate of winning or losing relies upon a particular event which at the time of contract is not certain. Hence, it is a betting agreement. Here, the parties to the contract do not have any interest in the contract, except for the money which they gain or lose.

Essential Elements of a Wagering Agreement

There are a number of conditions that must be met to be called a wagering agreement. These conditions or elements are: 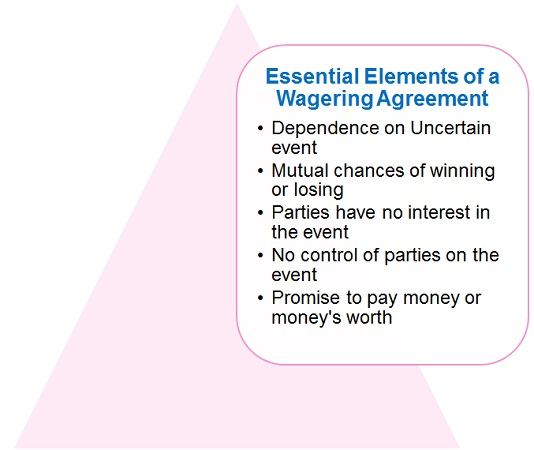 The consequences of the wagering agreement can be:

Effect on the main transaction

As we know these agreements are void. Thus, the winner in such contracts cannot recover the amount of money involved from another party to the agreement. Moreover, any new promise to pay the already won sum upon the wager also stands as void.

But, when the money is already paid to the winner, then the recovery is not possible.

Effect on the collateral transaction

It is worth noting that wagering agreements are void, but they are not unlawful, except in the states of Gujarat and old Bombay. So, the transaction collateral to the original transaction is not void. So, the collateral transactions are valid and they can be enforced in a court of law.

Alisha and Bella bet each other Rs. 5,000 that a particular political party will win the general elections. Alisha borrowed Rs. 5,000 from her cousin Chetna, for that bet. Alisha failed to win the bet and pays Rs. 5,000 to Bella. In such a situation, the agreement between Alisha and Chetna is collateral to the main agreement and so it is not a void agreement. Hence, Alisha will be liable to pay the borrowed sum to Chetna.

Transactions that are not Wager