What is Micro Computer?

The term microcomputer is associated with computers that are smaller than minicomputers and are designed for personal use i.e., they can be used by a single user at a time. A microcomputer is designed using a single-chip microprocessor

The first declared microcomputer was Micral that was designed by the French company named Realisation d’Etudes Electroniques. Micral was based on the Intel microprocessor 8008. Micral was the first non-kit computer.

Although the Micral and MCM/70 were launched earlier Altair 8800 was appraised as the first successful non-kit microcomputer. Altair was designed by Micro Instrumentation Telemetry Systems (MITS). The microprocessor used in Altair was Intel 8080.

Now a day the microcomputers come in the form of smartphones and they are even embedded in machines with artificial intelligence such as microwaves, washing machines, portable music players, etc. 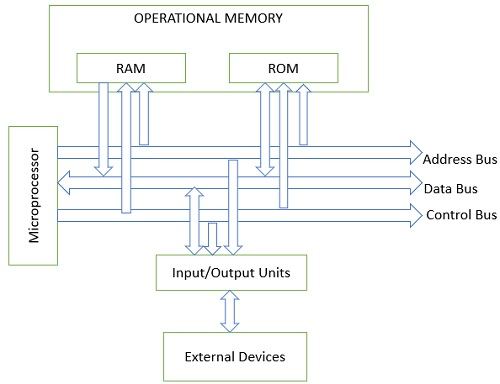 The microprocessor is connected to the other components of the microcomputer with three buses:

The other components of a microcomputer include:

The desktop computer is the one that is placed on the table. It is connected to input and output devices such as keyboard, mouse, monitor, and CPU. The desktop is not portable as it cannot be moved and is restricted to a fixed area.

The laptop appears like a notebook and can perform complex functions like the desktop. The laptop runs on an in-built battery. Laptops are quite expensive and are available in various sizes.

The laptop has an inbuilt screen, keyboard, touchpad, and has an inbuilt processor. Laptops are portable as they can be taken anywhere and can run on the battery backup.

Smartphones are a smaller form of a table as they also have a touch screen interface that can be used for performing both input and output activities. Smartphones are pocket-sized device that operates on an inbuilt chargeable battery.

PDA (personal digital assistant) is a portable handled computer. PDA is a small size microcomputer that can be carried along almost anywhere. PDA operates on an in-built chargeable battery.

We can even connect from other computers using the PDAs. In modern days PDAs have been replaced by smartphones.

The server microcomputer serves the data to the computers that are connected to the server computer via network.

Whatever data is surfed on the world wide web is provided by the different server microcomputers that are present in the different locations of the world.

The workstation works similarly to the server. Workstations are meant for sharing data on the network at the workplace.

Advantages and Disadvantages of MicroComputer

After learning all about the microcomputer we can say that microcomputers are designed for individual use. They are becoming important for our day-to-day work such as sending emails, preparing presentations, playing games, even in the education sector, business, medical, etc.